The Students’ Union at UWE encourages students to reflect on their drinking through peer-to-peer interaction.

Drink Rethink at the University of the West of England (UWE) 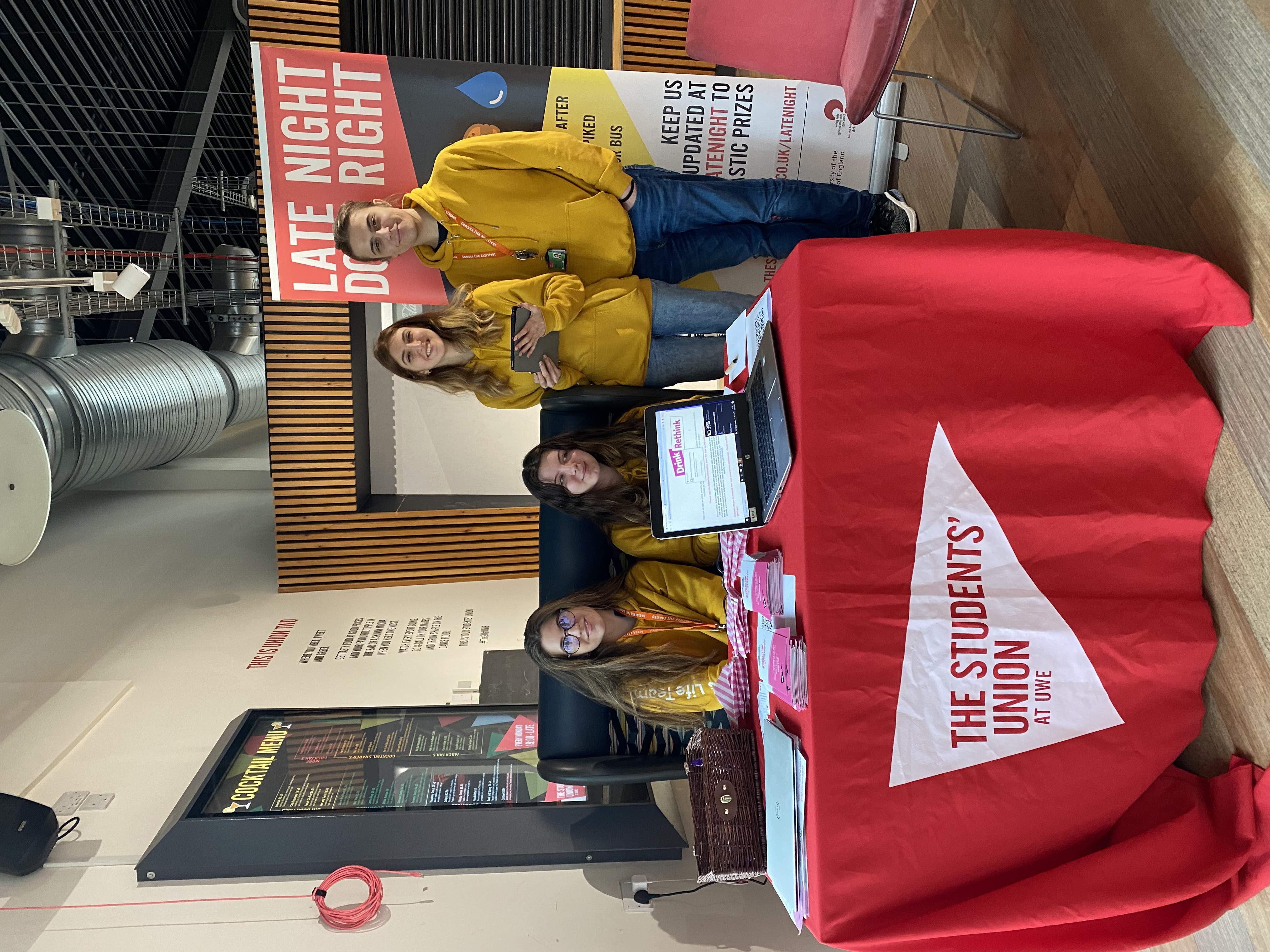 In February 2022, The Students’ Union at UWE signed up to take part in Drink Rethink with SOS-UK.

Drink Rethink is a preventative approach that enables and encourages students to reflect on their drinking, consider risks associated with alcohol consumption and the benefits of reducing consumption. It is an intervention delivered by trained student ambassadors who use the nationally recognised evidence-based behaviour change tool known as Identification and Brief Advice (IBA).

Drink Rethink adapts approaches from use with the general public in informal settings, to suit a student audience, and it draws on evidence that suggests interventions conducted within a university setting and by non-healthcare professionals have greater efficacy than similar delivery in other non-health-related settings.

“The Students’ Union at UWE is always looking for new and innovative ways to engage with UWE students on responsible drinking habits. Drink Rethink is an excellent intervention, as evidence base, but also peer led. We know students will respond more favourably to conversations with their peers, we look forward to rolling out this approach again in the future.” - Rania Regaieg (SU President)

11 students were trained as Drink Rethink ambassadors and engaged with over 100 students during a two-hour period.

At the University of the West of England (UWE) where Drink Rethink has taken place, there have been a number of positive outcomes.

·       7 students received a general leaflet without completing the audit

Following their participation, students were shown their total AUDIT score and were given a leaflet tailored to their audit risk categories of alcohol dependency (low risk, increasing risk, high risk, higher risk/possibly dependent).  Students were also signposted towards welfare and support services at UWE for further advice.

To evaluate the impact of the intervention, participants were invited to complete an online follow-up survey three weeks after completing the initial AUDIT.

The follow-up survey had 20 respondents and they were asked what the main thing they recalled about their experience was. Of the 20, 8 completed the full AUDIT, their responses revealed that:

·      25% agreed that Drink Rethink made them change how often they drink alcohol.

Comments from those students who took part included:

“I talked to nice people”

“I was surprised by my result”

The student ambassadors were also asked to complete surveys before and after their participation to assess how the opportunity enabled them to develop key skills.

Of the 7 respondents, it was found that:

·      100%- felt they were more aware and tolerant of the diverse needs, feelings and views of others

·      86%- Said their confidence in meeting new people had been improved

·      86%- Said they were more confident putting their ideas forward

In addition to the students participating in the AUDIT, the intervention was hugely beneficial to the Drink Rethink Ambassadors.

To find out more about Drink Rethink please contact tracy.lumb@sos-uk.org